Got that Pilot Feeling

The weather hasn’t cooperated lately but today things seem to look good.  I had my instructor scheduled for our weekly dual session but she suggested that I go ahead and fly my first real cross country solo.  I have been trying to get it in but the days I have scheduled have been less than ideal. Today I’ve got that pilot feeling!

I performed all of the navigation calculations and headed to the airfield.  Now I have to say, I haven’t flown in over a week and before that it was a couple of weeks, I didn’t have any butterflies.  I was focused on the mission.  When I arrived, my instructor looked over my calculations and my plan, listened in while I got the weather/filed my flight plan and we quickly discussed some procedures.  After this, she ushered me off reminding me that I need to be back before the next reservation and also to remember to close my flight plan upon my return.

I walked out to my machine looking it up and down as I walk, making sure that nothing obvious is out of place. I make a thorough pre-flight to make sure she is ready to carry me aloft.  Everything checks out but there is one last thing.  Bathroom break. It wasn’t nerves, I don’t think, just nature calling.  As I said before, I was pretty relaxed all morning.

Back in the cockpit, I was ready to go.  Started the airplane, went through the run-up procedures and taxi’d to the runway.

My Turn so I taxi onto the runway.  Heels to the floor, throttle full, green green green, airspeed alive, rotate and away I go floating above the earth on a cushion of air.

Once on course, I call up flight service to open my flight plan.  Next, Fayetteville approach for my flight following.  I am making radio calls, climbing to cruise altitude, beginning my navigation way-points and completely at ease.  It wasn’t too long ago that I saturated my workload capability and had to have my instructor help out.

Once I reached my cruising altitude, trimmed out and performed my cruise checklist.  At this point I realized that the plane was trimmed and flying hands off and the air was glass smooth.  I was able to sit back and enjoy the rest of the flight to my round robin destination.

Since it was so smooth and everything was under control.  I broke out the camera for some pictures! 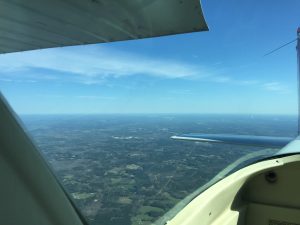 Once I landed, I taxi’d over to the fuel pumps and filled up.  This is the first time that I have fueled the airplane unassisted.  Even though, there was a gentleman on site that made sure that I didn’t do anything wrong.  We had a nice chat.  The aviation community is good like that.  Part of flying is just going to little out of the way areas and meeting others in the aviation community.

On my way back, I was cruising a thousand feet lower and was rewarded with a shear layer.  This means that I am paying for my smooth trip down by a really bumpy trip back.  On the way I heard military traffic over the approach comms.  Looks like Pope was running some maneuvers with Jets in the restricted area 30 miles east of my track.  It was pretty cool, you could definitely tell the fighter jocks because their masks were causing a muffled affect on their audio.

I returned to TTA and made one of my better landings.  I really think the short and soft field work improved my landings.  I landed around the time that I predicted and plenty of time for the next reservation.  I chalk that up to good planning! Haha

It was a good day.  Mostly because even with the cockpit management and workload. I felt completely at ease.  I felt under control.  I felt like a pilot!

Back in the air, Monkey off my back

So back in the air after a nice weeks vacation in the Caribbean.  While I was away, two things rattled around in my brain as I sipped mixed drinks by the ocean.  One, my landings have been crap lately.  I have been transitioning too high, bleeding off speed or floating and dropping to the runway with a thud.  The other was my previous experience with advanced takeoff and landings, Soft Field and Short Field.

If you read my previous entry, Weirdly frustrating day… you would know that I scared myself during gusty soft field take offs.  That has haunted me ever since.  Well.. winds were light and variable so we tackled soft field and short field today.

First up, soft field.  My instructor showed me how it is done and again it felt weird as a passenger as she expertly maneuvered us around pattern. As expected, she did a wonderful job.

Now was my attempt.  To say I was nervous was an understatement.  I felt like this was my first take off ever.  I dropped 10 degrees of flaps and pulled the yoke to my stomach and started my slow taxi onto the runway.

I advanced the throttle and soon the front wheel was off the ground.  This time, I released some back pressure as needed to keep the front wheel from getting too high.  Now this was key, because in my first attempts, I had full back pressure and we lifted off quickly and I struggled to find the ground effect with a stiff crosswind pushing us off the runway.  Today, I felt under control.  I felt the plane lift from the ground and I held steady in the ground effect to accelerate.  As I reached my Vy speed of 65 kts, I retracted flaps and performed a normal climb.  Easy Peasy.  To reinforce my feeling of joy I hear from the right seat, “Text book soft field take off!”  Yay me!

The landing was not all that soft but the approach was good.  And it was a site better than I have been doing as of late.  Two more times around the pattern for soft field take offs and landings.  The second landing was nearly perfect, except as the wheels kissed the earth, for some unknown reason, I pulled back on the yoke, lifting us back up a couple of inches before settling down.  The third landing was pretty decent, could have been softer but I have the technique down now, just need to practice.  All of the landings were far far better than I have been doing in the last month, so that felt good.  Along with the confidence of soft field, I felt really good.

Next we moved on to short field take offs and landings. Once again, I let my instructor show me how it is done.  We didn’t get this far last time, so I didn’t have too many worries.. err expectations.  It seemed much more straight forward so when my turn came, I was feeling at ease.  I went through my lights, camera, action pre-takeoff checks and dropped 10 degrees of flaps.

As I taxi’d onto the runway, I was trying to hug the edge and when I turned… I was not at all lined up with the center line.  More like 10 feet to the right.  No big deal, but sloppy and I would definitely pay more attention to the turn next time.  Feet on the brakes, full power…. as the engine fully develops the power, I release the brakes.  Airspeed alive…. 50, rotate and climb at 55 kts.  Once I reach 50 feet above the runway, I lower the nose and accelerate to 65 kts… retract flaps. Not too bad.

As I turn final, I drop 30 degrees of flaps and slow to 55 kts.  The controls at this speed are pretty mushy but I have trained in slow flight at the edge of a stall and we weren’t nearly at stall speed in this configuration.  I was aiming to land on the numbers so I aimed for a dirt patch just before the runway.  As I got closer, I adjusted throttle and pitch to maintain between 55-60 kts.  As I crossed the threshold and the wheels touch down right on the numbers.  Whoo hooo!!

Overall, I had a fantastic day. I haven’t flown in nearly two weeks because of weather and my vacation, so this was definitely a confidence boost.  As I said before, my worst landing today was silky smooth compared to my landings over the past month.  It felt great, and most of all, I really felt like I was the master of my machine.  I felt like a pilot!