So as part of my checkout on the Mighty Mooney I needed to complete an Instrument Proficiency Check (IPC).

Let’s take a look at the basic requirements for an IPC. Good writeup at BoldMethod

I completed “Recovery from Unusual Attitudes” in the previous lesson, The Mighty Mooney M20J Checkout Part 1.

This particular flight was all about the approaches.  Today was a great day for it as the cloud deck was hovering around 700 msl at the time of departure and not looking like much lifting for the next few hours.

So I filed IFR round robin to KSCR.  KTTA -> KSCR -> KTTA.  The plan was to fly the RNAV 22 at Siler city, go missed, then fly the ILS 3 Y at TTA with the course reversal, and finally the RNAV 21 LNAV with Partial panel down to circling.  This would take care of all of my requirements.

Intercepting and tracking was used during the whole process.

It was nice because we are hard IFR for most of the flight and all of the approaches.  I didn’t have to wear the foggles at all… yay!

Time to Execute the plan:

TTA does not have a tower so you have to call to get your clearance. The clearance issued a heading of 360 upon entering controlled airspace.  So that was the limit of my clearance.  Even though I filed TTA -> OCEKO -> KSCR -> TTA, I was given the curious cleared as filed but then fly heading 360.  It was an odd exchange but figured we would get our vector to OCEKO once in the air.  That wasn’t the first oddity during this flight.

After departure, I contacted Raleigh approach and once they confirmed my location was cleared direct OCEKO at 4000.  As we neared OCEKO, we hadn’t been given any instructions for the approach and once we hinted that we were a mile out… they quickly cleared us but handed us off to Greensboro Approach and told us to tell the other controller we were cleared.

I thought that was a bit weird.  In hindsight, should have prompted them a little earlier because it seems we weren’t on the same page for approach.  I requested the approach on the phone and technically it was the same person. Oh well, no harm.

Once we were over to Greensboro Approach, they re-affirmed the clearance and asked for our intentions.  “Requesting return to TTA for another approach, N5760R”.  We were expecting to get alternate missed instructions to setup for return to TTA but it never came.

On the missed, we informed approach that we are now flying the missed and received cleared direct TTA.  I then requested the ILS 3 Y full approach, full in order to do the required hold.  Approach responded, “I’ll hand you off in a few miles and you can give your request to the next controller”.

Switching frequency to Fayetteville approach, I requested the ILS 3 Y full approach and we were cleared direct IKTOW @3000.  Now here is the first altitude weirdness.  Right  before we reached IKTOW we were cleared for the approach. Then as we crossed and I was about to drop down to the segment altitude, we were asked to stay at 3000.  I’ve never gotten an approach clearance then and altitude restriction right after with no further instructions. My instructor thought i was odd as well. Oh well, once we were inbound, they cleared us down 2100 and we proceeded with the rest of the approach.

On inbound we were asked our intentions and I requested the RNAV 21 full approach.  This time, as expected, we were given alternate missed instructions of Climb 3000 to YUXI and a switch back to Raleigh Approach.

During the missed approach, we were vectored due to traffic and positioning us for the full RNAV 21 approach.

Raleigh approach cleared us for the RNAV 21 but stay @ 3000 until we reached the final approach.  At least this made more sense because we had the clearance and knew when the altitude restriction would expire.  My instructor commented on the many altitude restrictions on approach segments today.  Once established on the approach, I went partial panel and did the LNAV step-down for the RNAV 21 down to the circling minimums.  At this point we broke through the clouds and I circled around to runway 3 for the full stop landing and finishing the IPC.

Overall, I thought I did well on the IPC.  Flying a new plane, second flight. And not flying IFR in at least 6 months, I felt I did ok.  It wasn’t perfect.  I was behind the plane a bit but was able to get the weather, briefing etc done on time.  Still getting use to a few things:

My instructor is awesome and he said I did well today.  He has a way of teaching you things in ways that stick and is very encouraging through the process.  I’ve heard horror stories of instructors that are constantly putting you down and taking all the enjoyment out of flying.  I am humbled by our clubs instructors in both their skill and their ability to teach at a high level.

I still need a few landings to fully checkout in the Mooney and since I need to get more dual complex hours (6.6 hrs) for my Commercial, I am going to try to do the Day VFR Dual Cross country.  Might as well knock out more than one thing at a time! 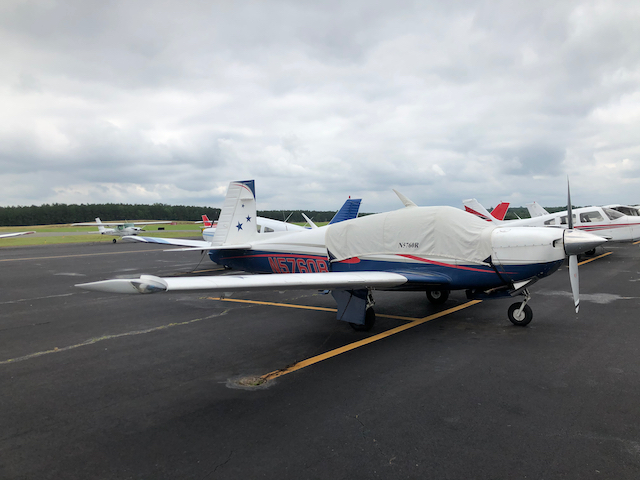